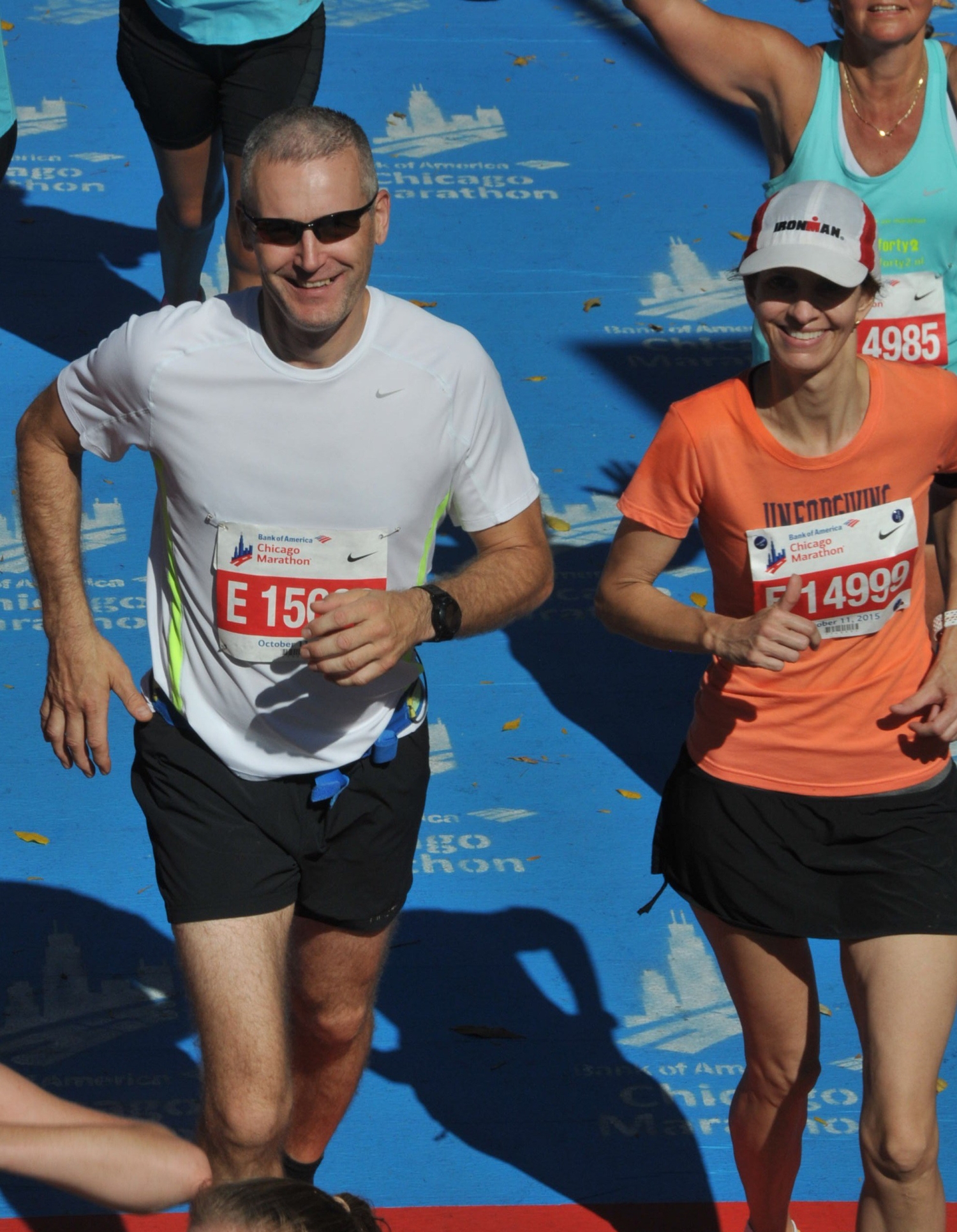 In 2015 I entered the lottery for the Chicago Marathon and I got in. It was about 50% chance to get in via the lottery and both me and Mr A were lucky.
Chicago Marathon is one of the Abbot World Marathon Majors which  is a series consisting of six of the largest and most renowned marathons in the world; Tokyo, Boston, London, Berlin, Chicago and New York City.  If you finish all six of these marathons you can get a Six Star Finisher Medal and certificate.

Chicago Marathon takes place every year the first or second Sunday in October. Starting in 1977, the Chicago Marathon has grown from a field of 4,000 to 45,000 and runners from all 50 states and more than 100 countries are on the start line. The marathon course is fast and really flat. Here you can see a video of a high-speed course tour.

This was my second marathon and we arrived Chicago the day before the race. We stayed at the Fairmont Chicago Millenium Park Hotel which was just a short walk from the start and finish.
In the afternoon we went to the EXPO to pick up our race numbers at McCormick Place, a huge convention center slightly south of the downtown loop. The race provided several free shuttle pick-up and drop-off locations around the city, one of which was close to our hotel.  The ride in an yellow American school bus took about 20 minutes, and after getting a rolling tour of the city we were ready to get our goods. We opted to pick up our bibs and shirts before checking out the various vendors and the process couldn’t have been smoother. 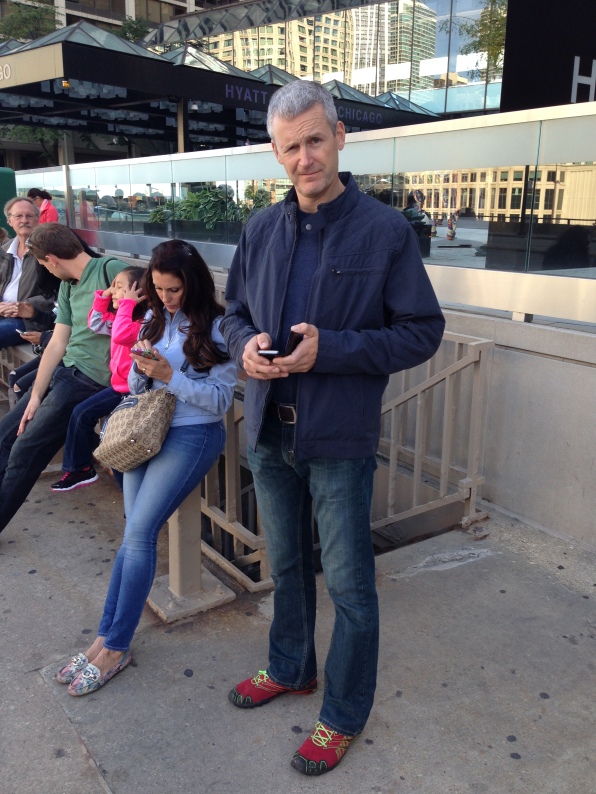 Waiting for the bus 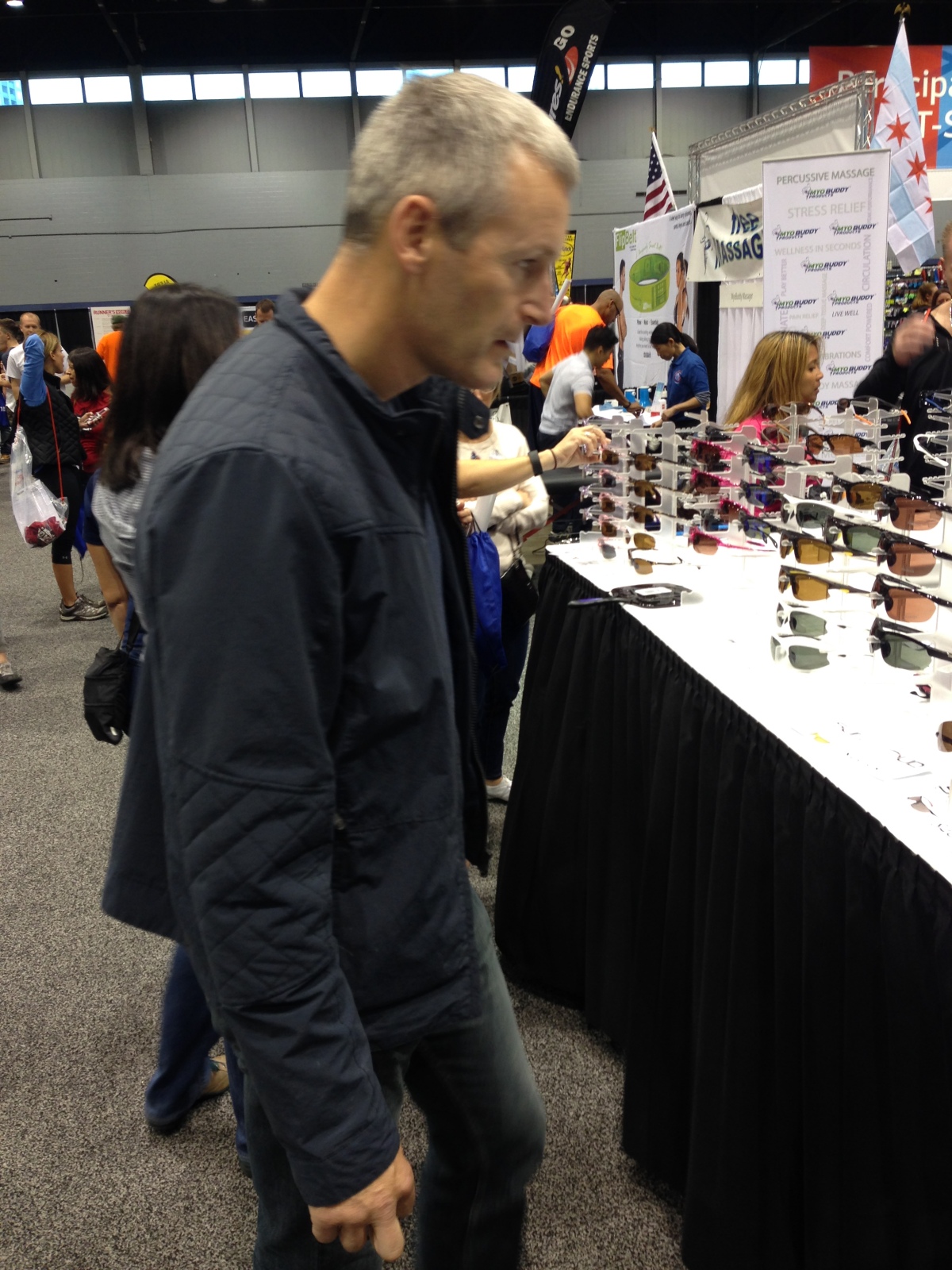 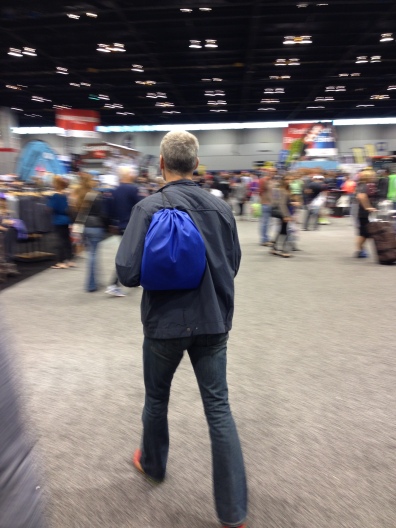 Race day we had an early breakfast at the hotel, before we walked over to Grant Park. After having done the NYC marathon the year before, it was nice to not have to go through any extensive travel beforehand. We entered the park at the first gate and found our start corral E, we were in the first wave.

The start of the marathon was great – it felt like I was in a canyon with the entire city around me. I especially loved going through the tunnel right at the start and crossing the first bridge. My Garmin running watch immediately got off track, probably due to the cavernous streets lined with skyscrapers. To track my real pace, I had to run by feel and do a little math every time I reached a km marker. I had studied the course map carefully, and knew exactly where I was at every turn. At 5K we decided to increase the pace for 30 seconds for every 5K we passed, to break up the monotony since the course was so flat. The first 10K flew by – running downtown was electric, and the views as we crossed the bridges was great. The first km’s along Grand Avenue and State Street was so empowering, with the concert-sized crowds, their cowbells, and the big-city streets just for us runners. When the tall buildings began to fade away, and we were in Lincoln Park, I thought about all the Chicagoan’s who get to run there on a regular basis. 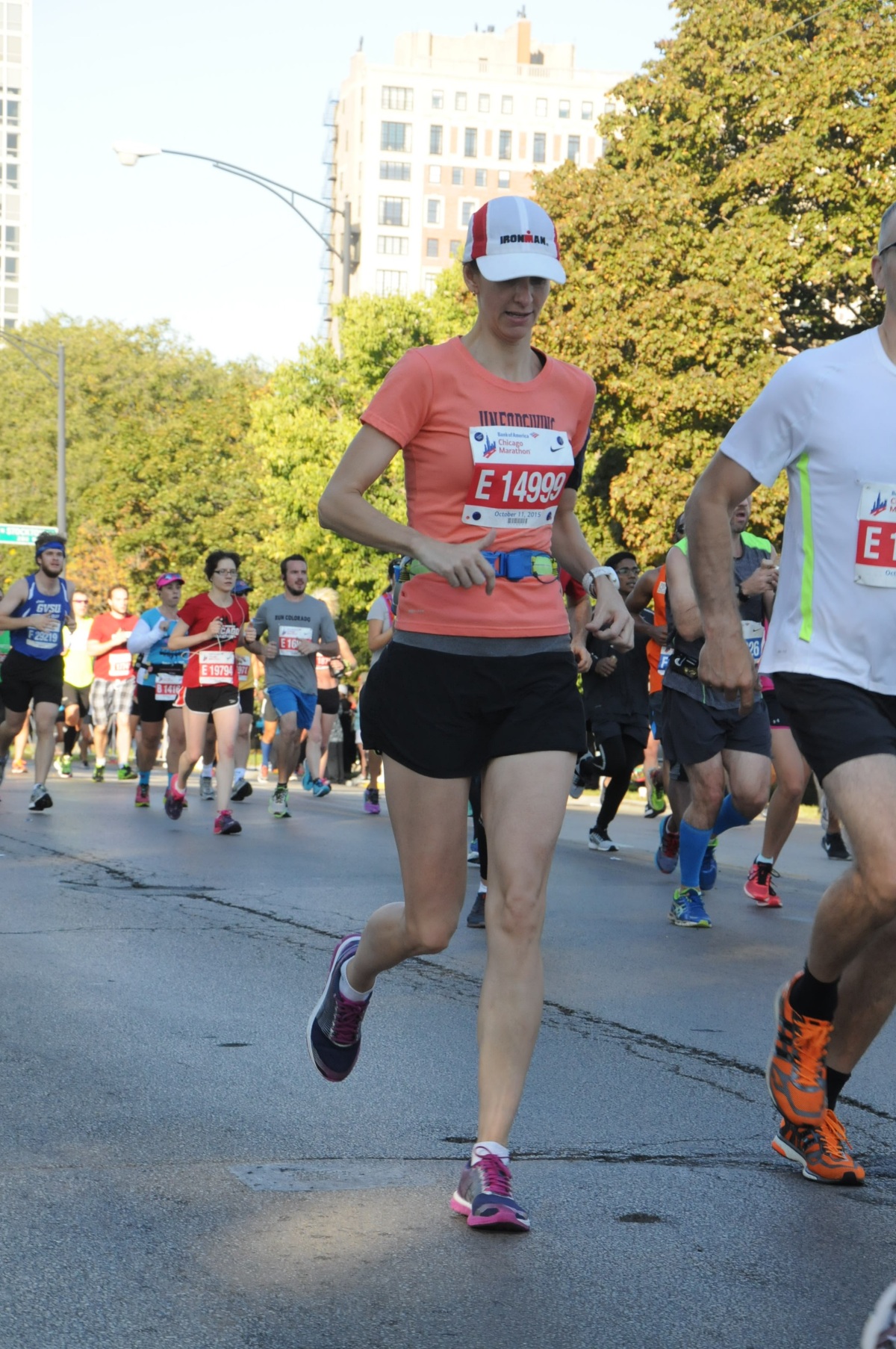 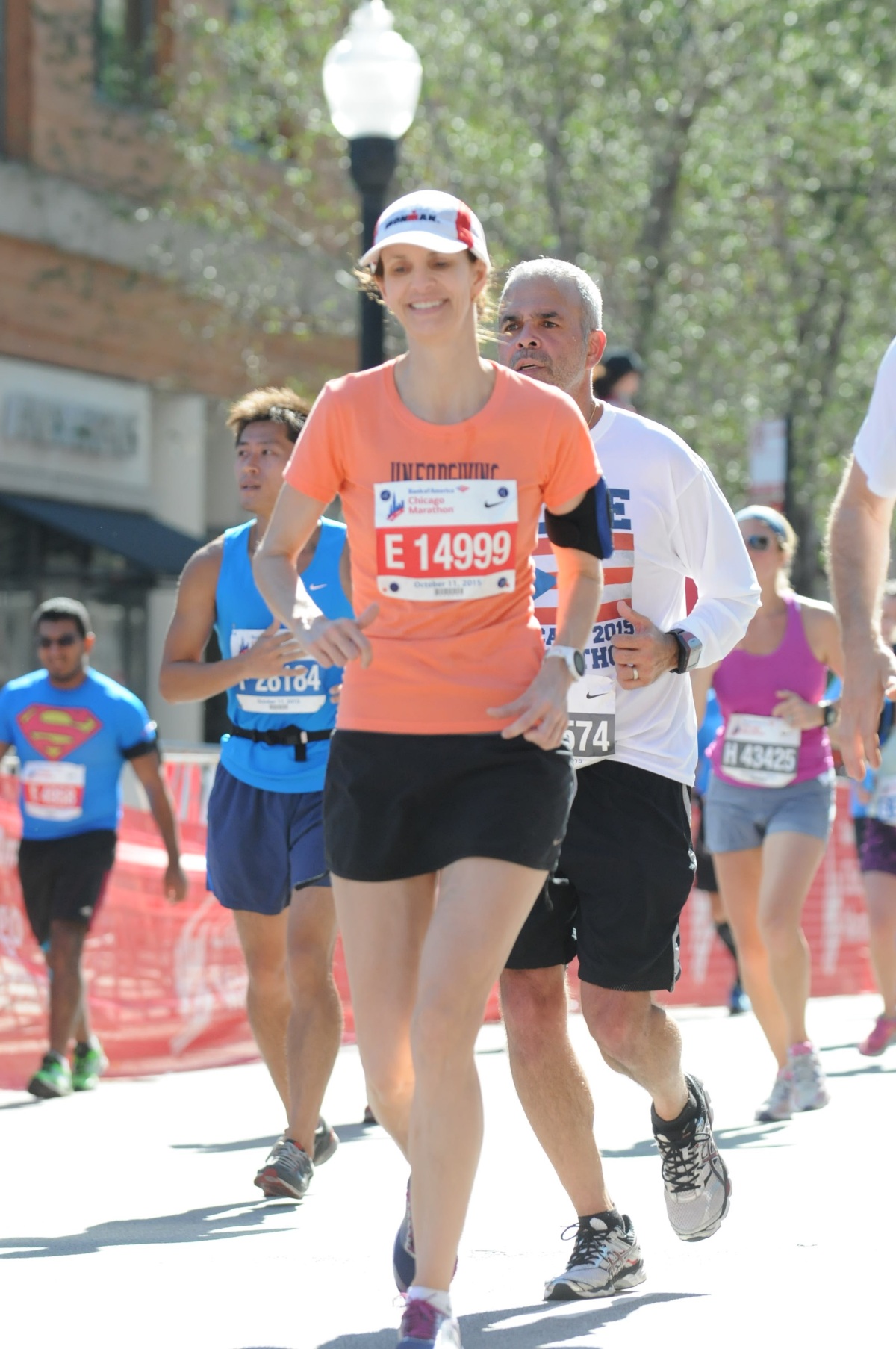 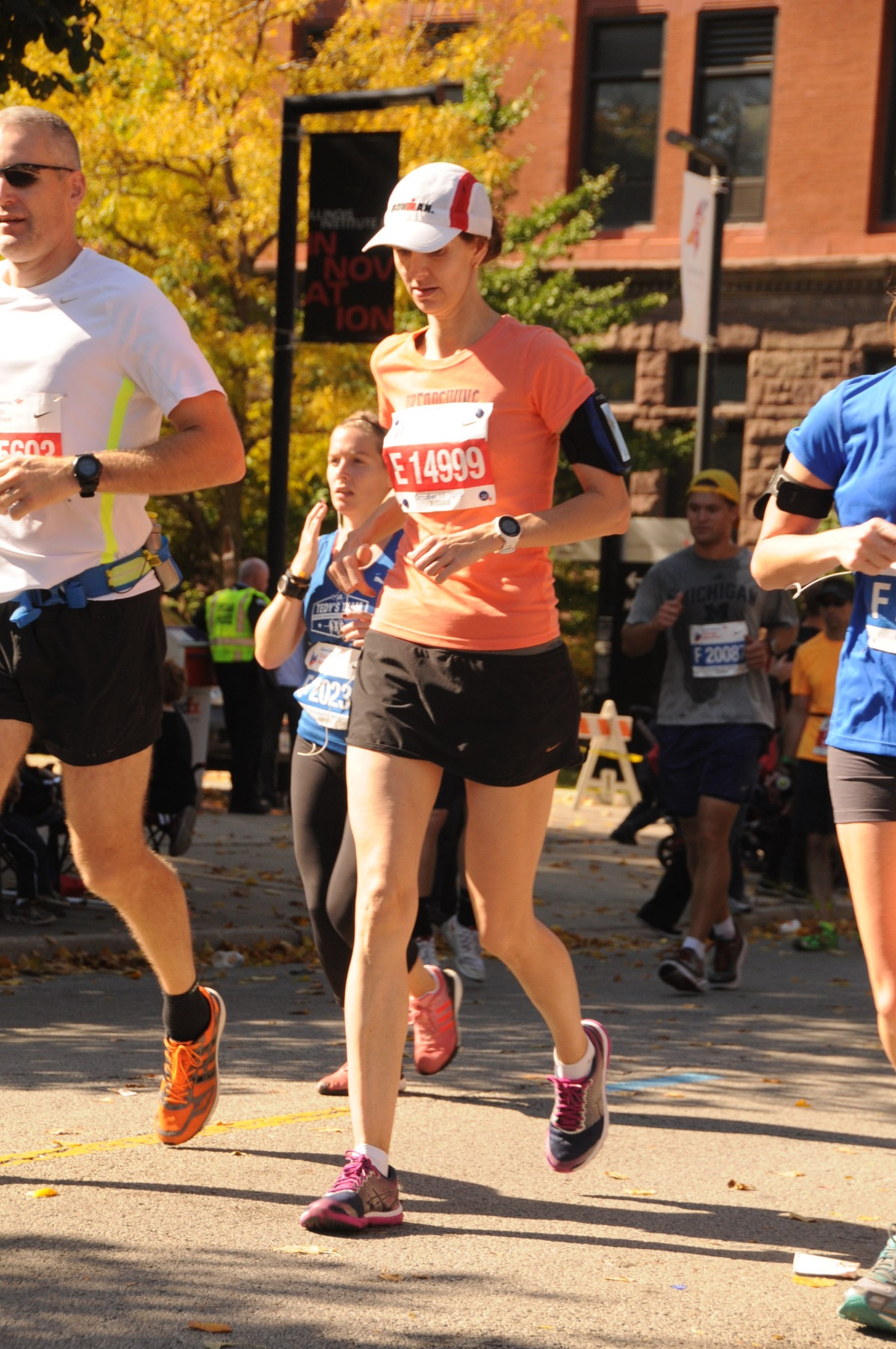 The second half of Chicago is decidedly less cool to run through than the first, and of course, the increasing mileage doesn’t help, but we did pass through some more great neighborhoods like Little Italy and Chinatown.

After passing 25K I was running out of energy, and at 30K  I hit the wall hard and the kilometers started to seem interminable. Plus, the temperature was now above 20 degrees C and the sun was beating down on us. I was walking for longer and longer stints. Increasing the pace at every 5K was out of the question! I am always having trouble with fuelling during long races, and after a really bad experience with Gatorade the year before in New York I only drank water. My tummy can only deal with gels that I bring to the race and bananas, but unfortunately there weren’t any bananas at the refreshment stations before far out in the race and I was struggeling with my gels. Hitting the wall at 30K meant that I had 12K left and it felt endless….  Mr A was taking really good care of me at this point with picking up water for me and bananas and encouraging me to run. I know I was pretty bitchy at this point – Sorry!!!!!
The km’s from 30 to 40 was a crushing struggle for me, but I just kept telling myself that if I stopped I would be so disappointed in myself and it would taint all of the work I had done. The mile markers exacerbated the difficulty, but after passing 40K I managed to run without stopping again and the idea of a green spot to lay down at in the park kept med going. Finally, we turned off Michigan Avenue and onto the little bridge which is basically the only hill in the race. This hill (if you can call it that) was  pretty easy, the finish line was in sight, we did it and it was a new PR for me. 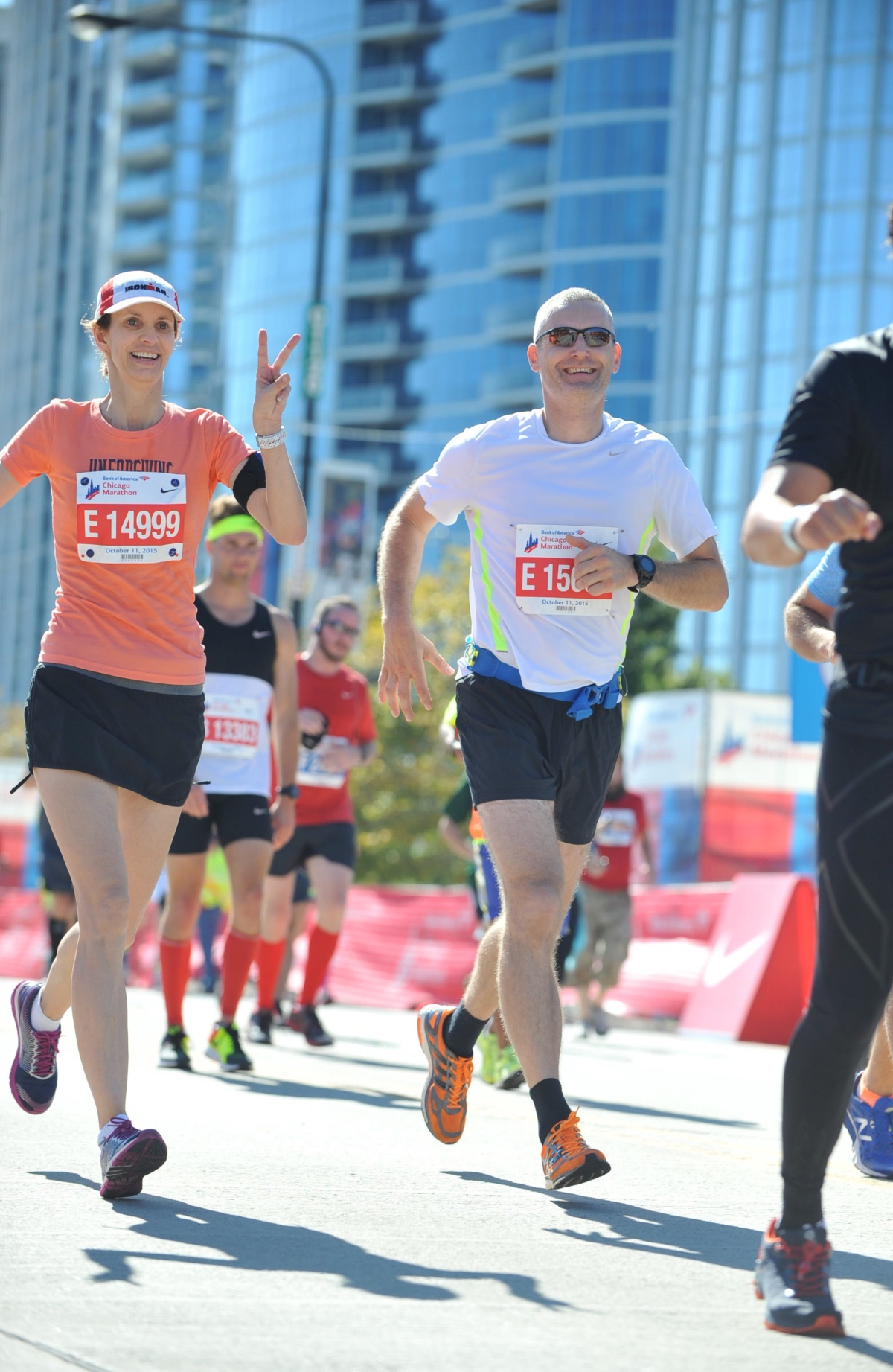 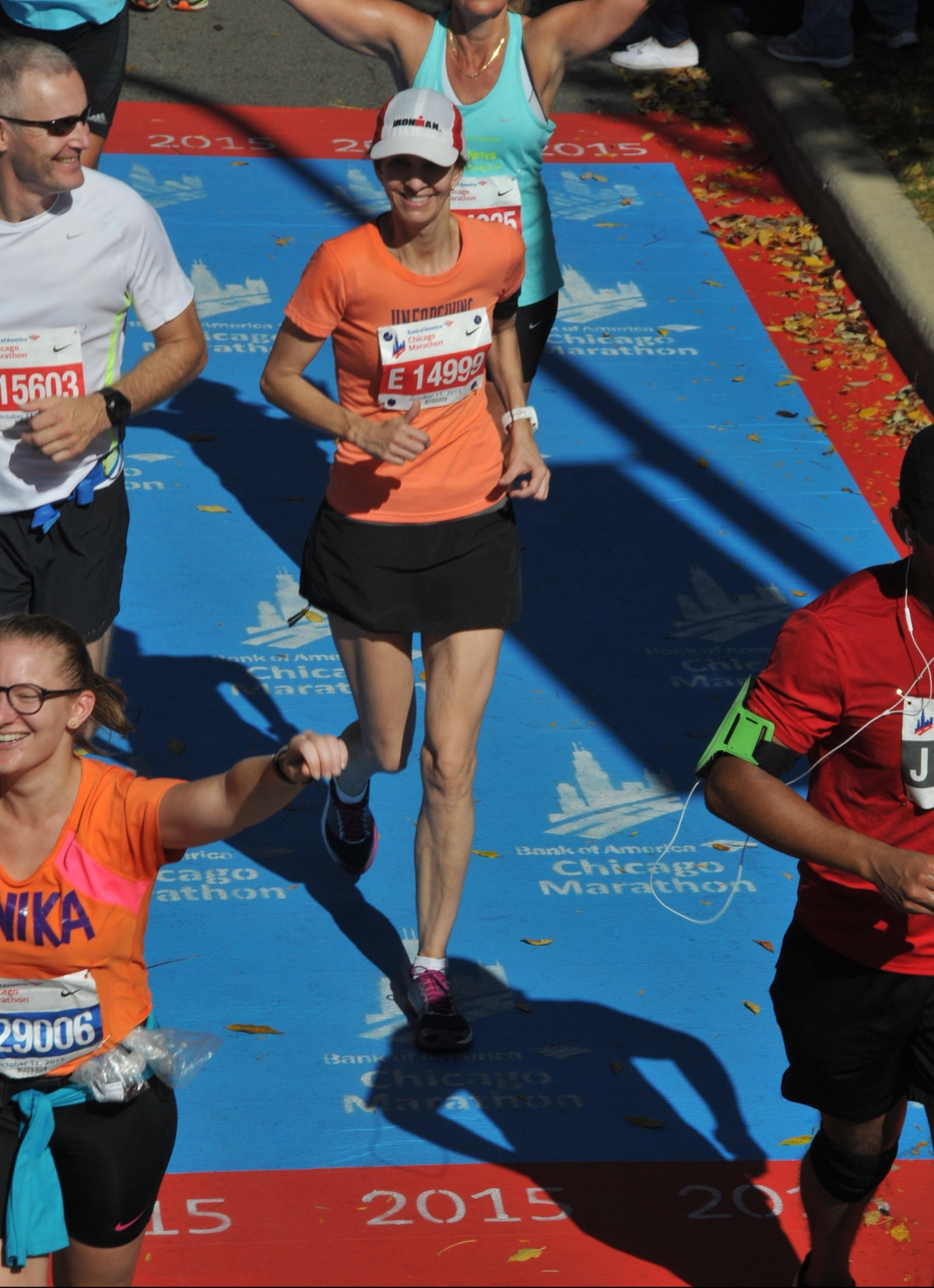 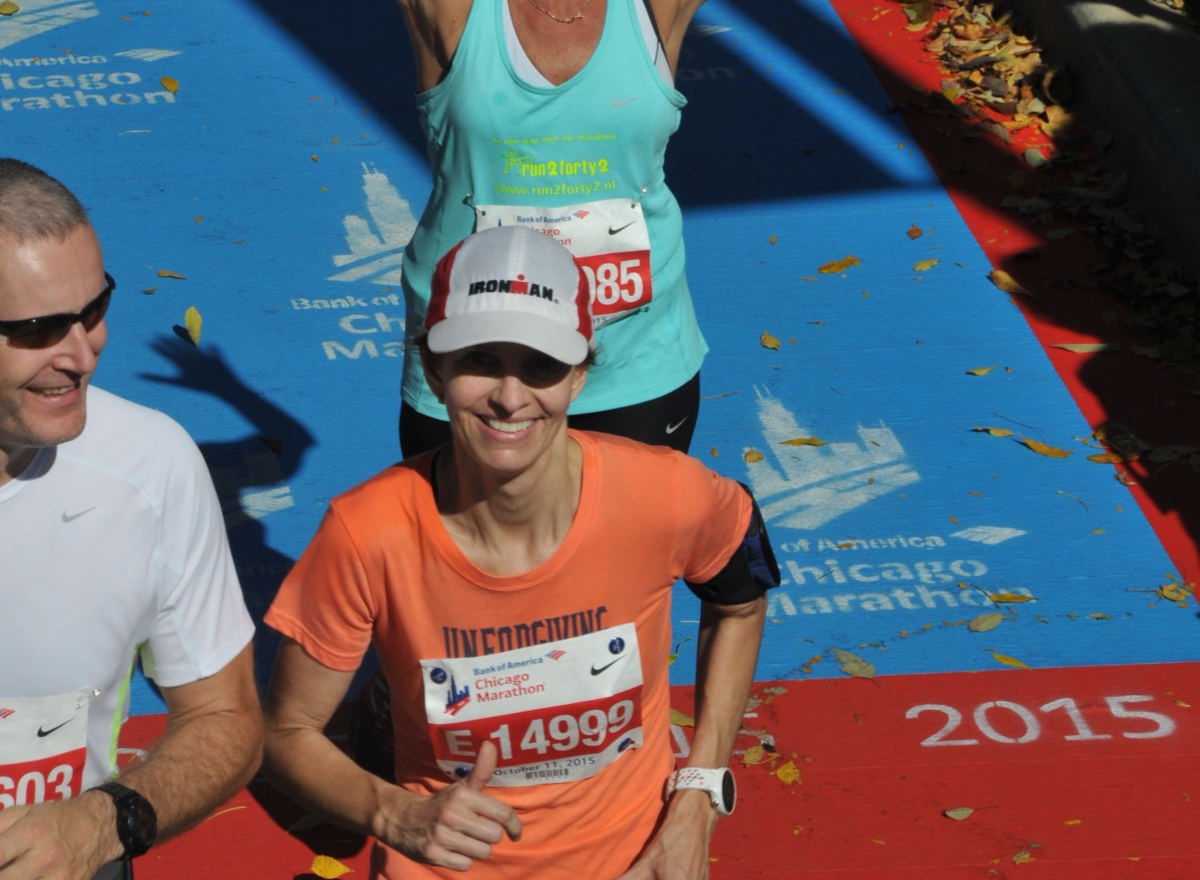 I was not doing very well after finishing and I got a bottle of water from a volunteer, but I couldn’t keep it down and it all came up again…. three times. Medical assistance wanted to drag me to their med. tent, but I insisted I was doing fine.
Chicago is one of the most well-organized races and after receiving our medals we continued north on Columbus Drive through a long athletes-only area.  In fact, the majority of Grant Park is athletes only.  So, we continued down the row getting water, bananas, a bag of food samples, Powerbar recovery shakes and Gatorade. The park was crowded with marathon runners, music was playing and beer was being served. I finally laid down, took off my shoes and realised that I had blisters under my feet. I thought my socks were wrinkled, but it was my skin…. Walking with blisters was painful, but not walking around in Chicago after the race was not an option. This Sunday was the warmest day of our short stay in the US – it was a very warm summer day for us Norwegians. Since the marathon started so early we had the whole afternoon to wine and dine, shopping etc…..  It was a great day in a one of my favorite cities, that I will never forget!

I feel so fortunate to have participated in fantastic marathon races like Chicago and New York. I really liked the course in Chicago and that start and finish was in Grant Park nearby the hotels and the Magnificent Mile. I also liked that the race started so early, our corral started before 08:00 AM. The NYC marathon course is harder than Chicago marathon, but the heat in Chicago was tough for me. I won’t mind doing this marathon again, but then with bananas in my pockets and without blisters under my feet….